THE TOUR KICKS OFF MARCH 4TH IN SEATTLE, WA AND WILL MAKE OVER 40 STOPS, MARKING HIS LARGEST-EVER UNITED STATES TOUR 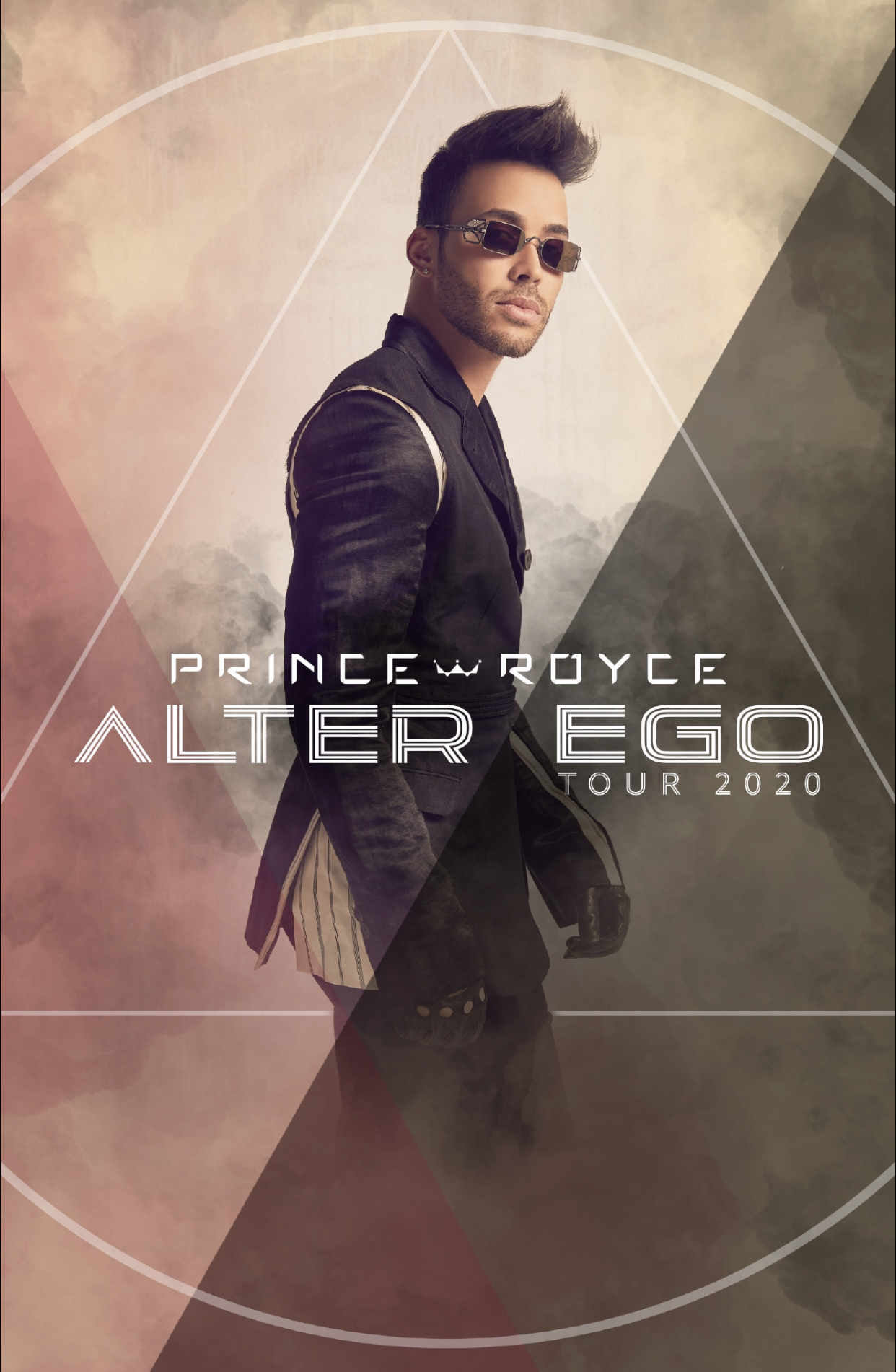 LAS VEGAS, Nevada (November 13, 2019). Multiplatinum award-winning Latin superstar Prince Royce announces the United States leg of his ALTER EGO Tour. The 40+ city run that kicks off in Seattle, Washington on March 4th, marks his largest-ever tour of the country, including stops at the AmericanAirlines Arena in Miami, The Forum in Los Angeles and Prudential Center in Newark as well as in other markets where Royce has never performed, such as Boise, Idaho; Portland, Oregon; and Minneapolis, Minnesota.

“This tour will bring me closer than ever to my U.S. fans – I am so happy I will be visiting so many cities with the brand new ALTER EGO concert experience where I’ll be performing all of my classic hits and of course the latest music from my upcoming album,” expressed Royce.

For ticket information for the USA leg of the ALTER EGO Tour visit www.princeroyce.com Tickets go on sale November 22nd with a special fan pre-sale on November 20th starting at 10:00am local time with password: TRAMPA.

The artist’s ALTER EGO album is set to drop in early 2020. To date, the singles that have been released from ALTER EGO have more than one billion combined streams across digital platforms.

The first single released was 6x platinum urban track “El Clavo” (and its remix feat. Maluma) which reached #1 on Billboard’s Latin Airplay chart, followed by 2x “Adicto”, a bachata with Marc Anthony which was #1 on the Tropical Songs chart for seven weeks in a row; then came “Cúrame” feat. Manuel Turizo, an urban song that has been certified Double Platinum in the United States and has more than 175 million streams across digital platforms. “Cúrame” reached #5 on the Global YouTube chart and remained in the Top 5 of YouTube’s Global Viral chart for 7 weeks, peaking at #3. Romantic bachata “Morir Solo” is the fourth track off the album and it is already topping the Billboard Tropical chart. This Friday, Royce releases his newest single, the explosive, urban banger “Trampa” featuring Zion & Lennox. 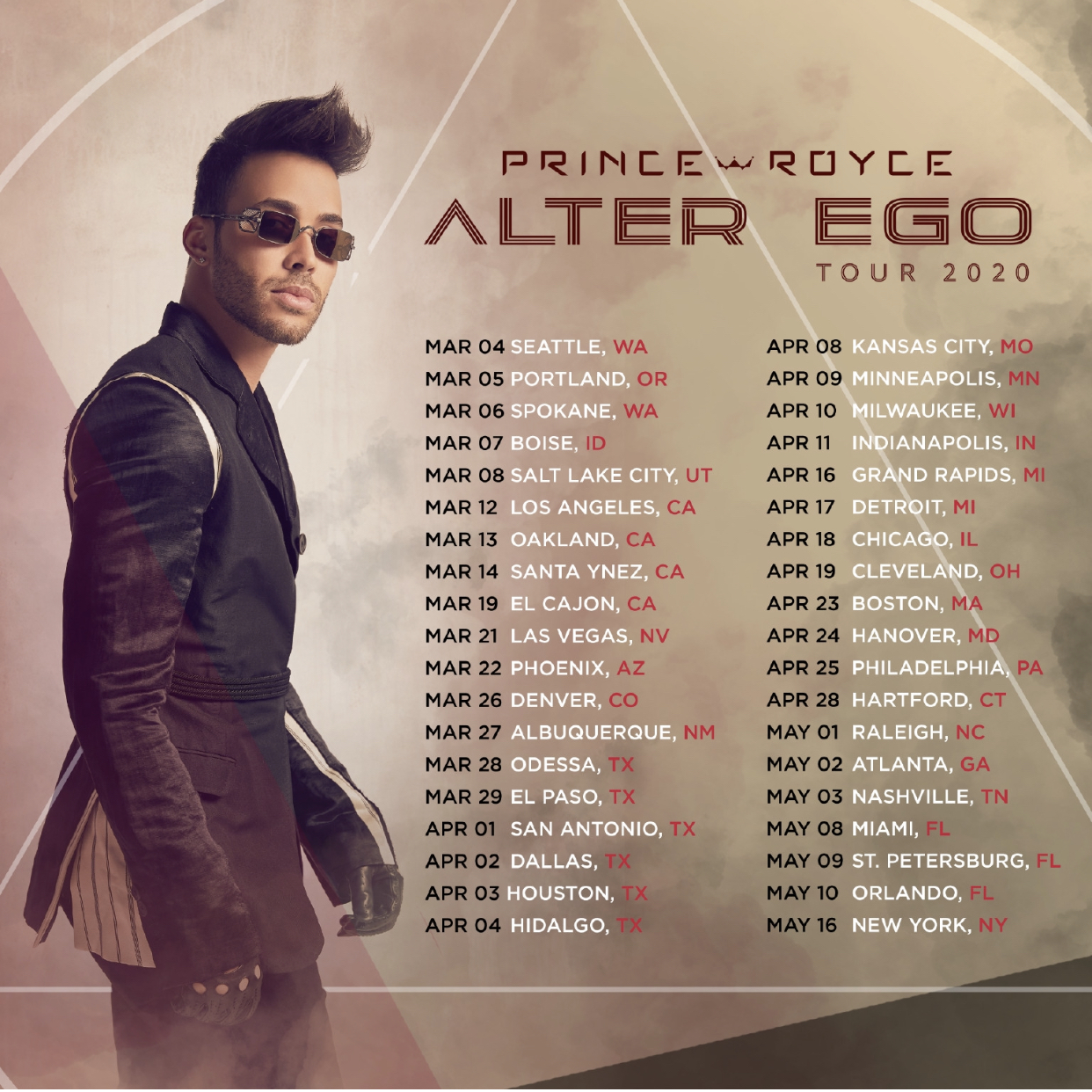 The official 2020 ALTER EGO U.S. Tour dates and venues are as follows:

****Additional dates to be added in the coming weeks
About Prince Royce
In the past 9 years, multi-platinum award-winning, singer/songwriter Prince Royce has become a bona fide Latin superstar, scoring 17 #1 radio hits, 22 Latin Billboard Awards, 19 Premio lo Nuestro Awards, 19 Premios Juventud Awards, 6 Latin AMAs, and 12 Latin GRAMMY nominations.Royce has a massive fan base with over 55 million followers on social media and he has sold out many of the most prestigious venues in Latin America and the United States. In February 2019 Prince Royce made history becoming the first and only tropical music artist to perform at the Houston Rodeo at the NRG Stadium where he attracted more than 55,000 euphoric fans.

His latest album, FIVE, was released in February 2017 and is Royce’s fifth career album. It debuted at #1 on Billboard’s Latin Albums chart and earned Royce the highest first-week sales of any Latin album in the two years prior to the release. The album has been certified Multi-Platinum by the RIAA in the United States and has garnered multiple international certifications. FIVE, made the Top Latin Albums list at Billboard’s coveted end of the year issue and Billboard also named Royce one of the Top Latin Artists of 2017.

Some of his collaborations include: Shakira, Chris Brown, Jennifer Lopez, Selena Gomez, Snoop Dogg, Pitbull, Thalia, Maná, Daddy Yankee, Becky G, Anitta, Ludacris, J Balvin, Bad Bunny, Farruko, and Maluma, among others. Prince Royce has co-starred as Peter in the Fox Live musical broadcast of “The Passion” in 2016 and was part of the cast of Hulu’s hit series, “East Los High”. In 2018, Royce guest-starred in Disney’s “Elena of Avalor: Song of the Sirenas” TV movie, voicing the character of Prince Marzel.

August 9, 2018 was proclaimed “Prince Royce Day” in New York by Mayor Bill de Blasio, in recognition of his contributions to society and for being a role model to youth in his home town. He has been induced into the Bronx Hall of Fame with a street named after him, and ran the New York City Marathon to raise funds and awareness on education in public schools and kidney disease.

Prince Royce is managed by David Sonenberg and William Derella of DAS Communications.